This is part 4 of my series about growing up in Oklahoma. Read parts 1, 2, and 3. I’ll actually be visiting the old homestead next week to see my HS BFF before she moves to Texas and hang with my AWESOME SISTER, so the timing is good. I’m kind of knee-deep in portfolio grading, so hang tight for more non-memoir, normal, regular stuff to resume when FINALS WEEK IS OVERRRR.

It wasn’t just the crazy weather and freakish, Martian landscape that weirded me out about my new home. It was also church.

As a kid, no one talked to me about religion before. I mean, not even my parents openly articulated our belief system to me: I intuited, through the skills of reading and intense listening, that we were Catholic (off and on), believed in (a?) God, and therefore in Heaven. For a brief period, when we lived in South Bend, we attended church services regularly, and I even became familiar with a few hymns. But, in a very Midwestern way, religion wasn’t openly discussed or acknowledged. We absorbed it by osmosis and it was made somehow clear that religion was something you worked out through practice and a lot of sideways glancing, mumbling, and copying the people in the pew in front of you. Church was really more of something you “did,” not a group of people you knew, or a “belief.”

When we moved there, at age 11, I was a bit startled that it was a general getting-to-know-you kind of thing in Tulsa. “Where do you go to church?” or, even more strange to my ears, “Do you have a church home?” This was often the second or third question asked of me when I met someone new. Because I was completely naïve about religion in general, and about conservative, Protestant branches of Christianity in specific, I had no idea that telling people I was Catholic was akin to saying I was a Satanist. I immediately marked myself as someone in need of saving. Early in seventh grade, several of the nicest people in the world invited me to a Christian Student Bible Meeting Fellowship Fun Group, and I accepted. I mean, I was desperate for friends and I was a bit of a goody-goody. Christian kids were probably nice, right?

We played Pin-the-beard on Jesus. No one got mad when I opened the 2-liter of Dr. Pepper and it sprayed everywhere. Then someone popped in a video of a guy named Carman. He sang a song about a showdown with the devil, dramatically shooting at figures he labeled “alcohol” and “drugs.” My memory of this is hazy, but I was disturbed. My father had been struggling with alcohol addiction for years and while it sucked completely, even as an adolescent I understood it to be a disease, not a moral defect. I turned to the girl next to me and asked her what that meant.

“Oh,” She murmured. “Alcohol is the work of the devil” (or some shit like that).

“But what if someone is an alcoholic?”

This is what happens when twelve year olds explain the works of Jesus to one another: I later understood both the point of the Carman song and the way she’d misrepresented the whole (decent) Christian take on alcoholism to me; but at the time, I was struck cold by the notion that my really lovely Dad might be condemned for having a disease he could not control. I didn’t know much, but I knew that was wrong. I left the room. 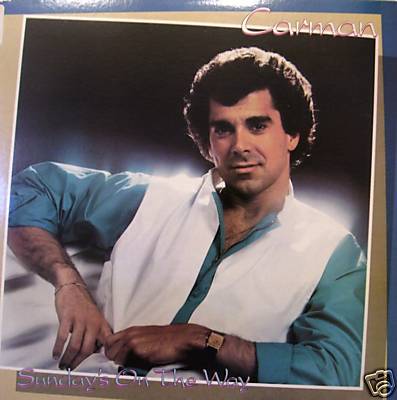 Before my Mom picked us up, we stood in a circle for closing prayer. I had never done this before. When my family prayed, which we did like once a year, we kept our hands to ourselves and chanted “God is great, God is good.” This was new: I clasped hands palm-to-palm with two boys and we all closed our eyes. A tall, supercute boy named Buck led the prayer, which he did in a rushed and monotone stammer:

We just want to thank you, oh Lord, for bring us together, Lord. Lord, please watch us, Lord, and help us follow your ways, Jesus. Lord, we pray that you love us and keep us in the good ways of the Bible, Lord, and the word of your son Jesus Christ, Lord. Oh, Lord, protect us from sin and just stick with us, Lord, and Lord we just want to thank you, thank you for this party dear Lord, thank you for the bounty of food and Dr. Pepper, Lord, bringing us together, this has just been awesome, Lord.

My hands shook and tears streamed down my cheeks: I was laughing uncontrollably, embarrassed for him and for me and for everyone else in the room. Did they really believe this? Did people, adult people, take this seriously? Each time Buck punctuated his prayer with the word “Lord,” the shaking intensified, and at the end I was flushed and grinning. This was mistaken for an infusion of spirit from Jesus, and everyone seemed to agree I belonged here.

This wouldn’t be the first time that my attempts to mask embarrassment and confusion at the actions of evangelical Christians would be mistaken for the emotion of conversion: a year later, I’d take a break from studying Algebra with a boy I had a powerful crush on, and he’d use that as an opportunity to start racking up “Saved” points for the Charismatic church his family had just joined. As he asked me if I’d accept Jesus into my heart, I lamented the dramatically bad turn this quasi-date had taken, and flopped my head onto my folded arms. I hit my nose on the kitchen table and popped back up, gasping, my eyes brimming with tears.  He really thought he’d done something for Jesus – for me – that day.